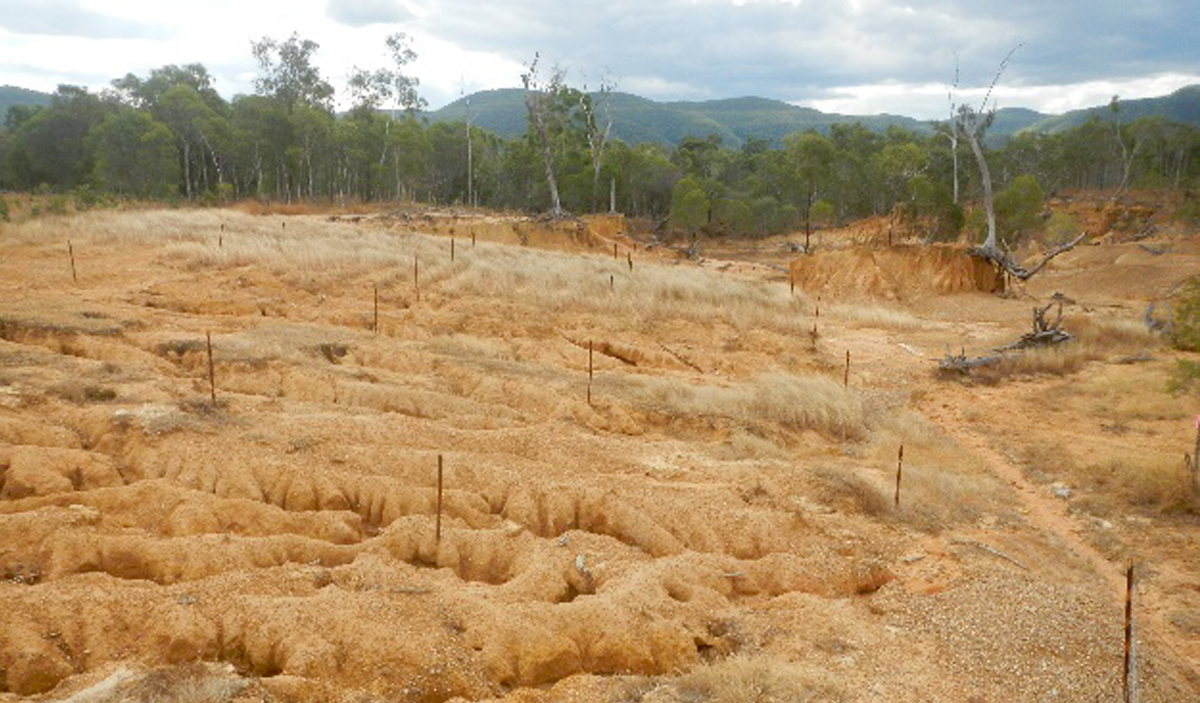 Construction and mine sites are hot spots for disturbed soils – and a significant disturbance can alter the structure of soil entirely, leaving it unfit for purpose.

In Australia, disturbed soils are particularly prone to high concentrations of sodium, a condition known as sodicity, which can create significant structural and revegetative challenges.

Soil disturbances often require holistic solutions, hence the value of microbes. These microorganisms decompose organic matter and fertilise the soil to restore its natural balance and counteract the effects of excess sodium.

In the interest of supporting healthy soil systems and growth, the relationship between soil sodicity, plants and microbes is worth exploring.

Sodicity in soil is the presence of a high proportion of exchangeable sodium. Generally, soils defined as sodic have an exchangeable sodium percentage (ESP) of 15% or higher. This influences the physical and chemical properties of soil, affecting the soil’s structure and its behaviour under natural conditions. As a result, soil is more susceptible to mineral imbalances that lead to a range of problems:

What causes sodicity in soil?

Sodicity is common in disturbed soils because sodic soils typically form in the subsoil layer at various depths, depending on the landscape type and parent rock material. These subsoils are subsequently exposed during the earthworks stage of construction.

When trees and plants are removed during earthworks, the water table can rise, reintroducing soluble salts to the topsoil layer that the plants and soil biology were managing. As water evaporates from the newly exposed soil layer, salts migrate towards the soil surface. Then, when it rains and the soil is able to freely absorb water, soluble salts can be released and flushed deeper into the soil profile, allowing the cycle to begin again. The chemical makeup of the soil can, of course, have a positive or negative effect on this natural process. 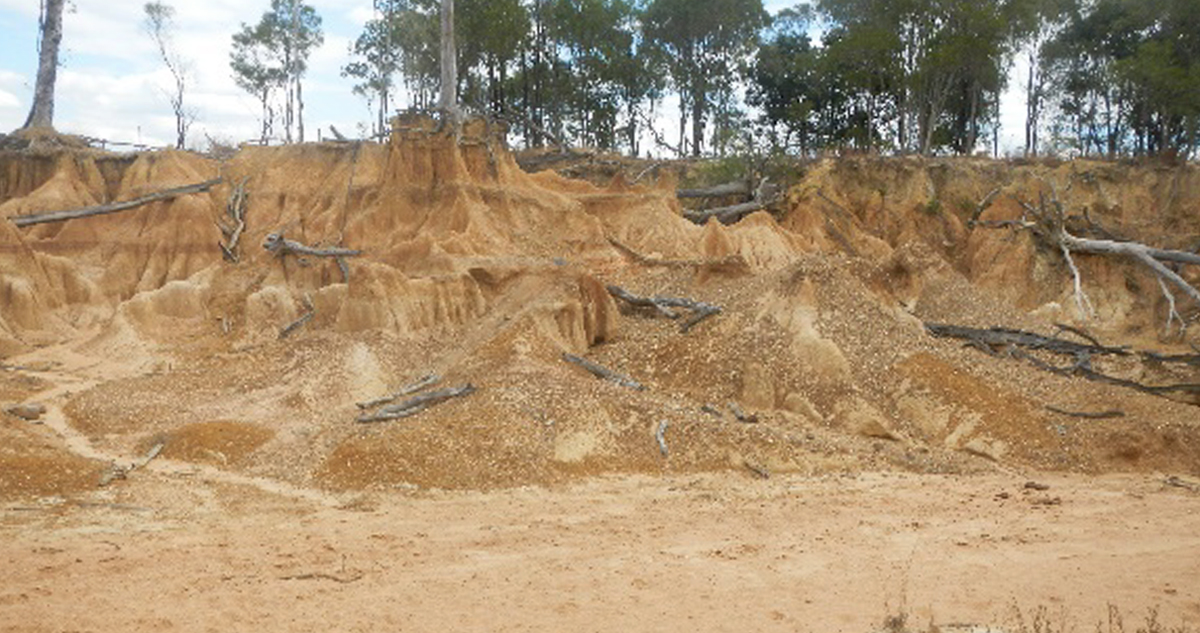 What is the relationship between microbes and sodicity?

Microbes naturally counteract sodicity in soil through their symbiotic relationship with plants. Plants and microbes enable each other to grow and thrive, even in the most challenging of soils – but of course, there are levels of sodicity that the natural system may not be able to overcome.

Most microbial species can tolerate soluble salts when they form in water as part of the soil solution, but when evaporation dries the soil, the salts crystallise, causing dehydration. This process induces lower microbial activity in the soil, negatively affecting the soil microbiome and the plant symbioses and delaying healthy plant growth.

This is where soil conditioning becomes important, kicking the natural system into gear. The BioGrowth™ program is designed to prime soil conditions for plants and microbes so that they can thrive and overcome soil imbalances in a more holistic and natural way.

What is the remedy for sodicity?

Implementing the correct soil biology inoculation and remediation program is the most natural and effective way to remedy sodicity in soils. This process involves first assessing the factors affecting soil quality – including levels of exchangeable minerals such as sodium, dispersion, slaking and total soluble salt – and then implementing a plan to address these factors. Typically, Gypsum is used to break sodium particles away from clay particles so that they can be flushed out of the soil profile with water, which is not always a practical solution to the problem.

An effective soil remediation process can be activated within three weeks, and should be monitored and measured until the desired outcome is achieved. Soil reconditioning and fertility enhancement is an ongoing process involving regenerative self-sustaining systems which can take several years to stabilise depending on climatic conditions.

How does the BioGrowth™ program counteract sodicity?

The BioGrowth™ program is unique in that it uses microbes and the symbiotic relationship they have with plants to neutralise sodium and remove it from the plants’ rhizosphere. The process begins with a comprehensive assessment of the soil via laboratory testing to determine sodium levels and other nutrient imbalances. The program works in stages – first cultivating and preparing soils for moisture infiltration and preservation, and then implementing a program with tailor-made soil conditioners like Calcium Plus and Carbon Plus in combination with our Bio-Fertiliser, a natural mineral ore-based microbial inoculated fertiliser.

A typical program involves the application of ameliorants followed by soil cultivation to enhance the effect of soil conditioners and allow moisture penetration. The cultivation process is critical in preventing a hard surface layer from forming, sealing out moisture and rendering soil conditioning processes ineffective.

Once there is a sufficient concentration of water in soil, microbe activation and seed germination can occur. During initial stages of growth, the microbes protect the establishing root system from sodium and other imbalances in the soil. Then, as the plant establishes and forms leaf matter, the microbes and the plant are able to work together to flush sodium out by transpiring it through the leaves – similar to the way humans sweat.

When implemented effectively, the BioGrowth™ program can condition unbalanced, high-sodium soils with sufficient nutrient content to allow microbes to survive and plants to thrive long-term. 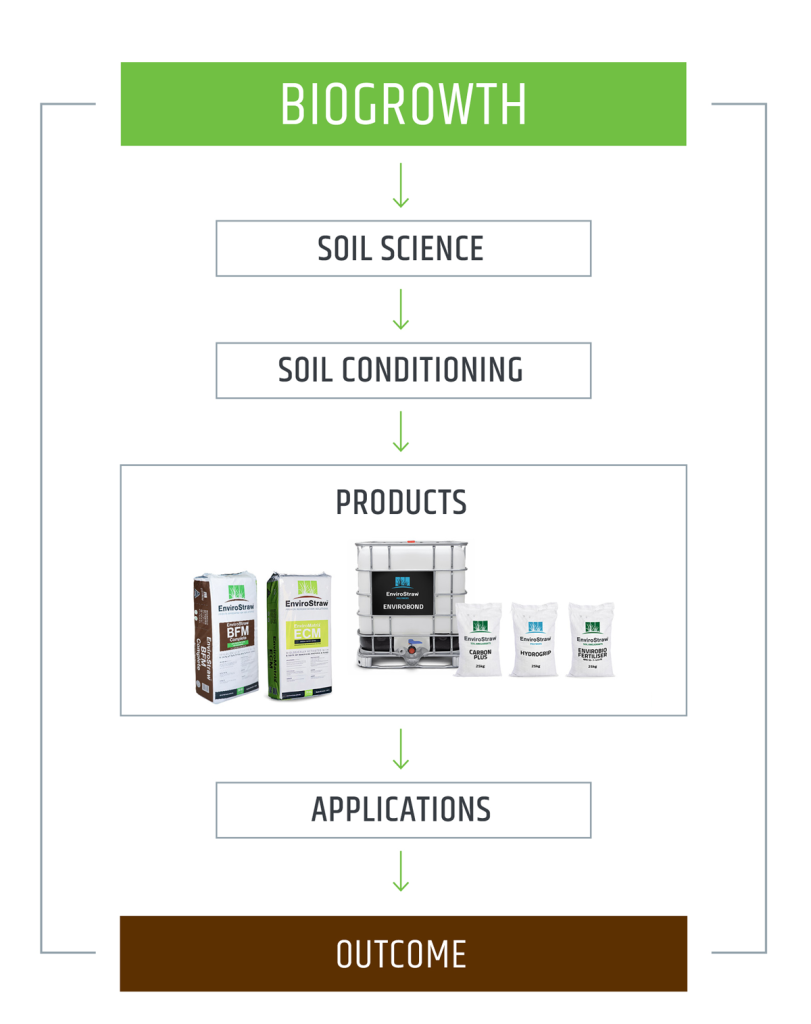 Are sodic soils onsite interrupting a project or thwarting your revegetation efforts? Contact our soil science experts today for a holistic, long-term solution.